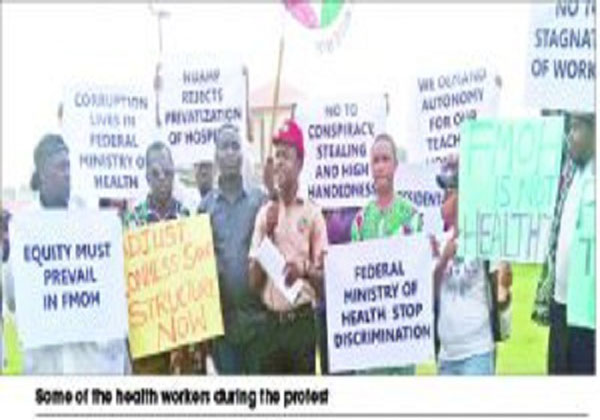 The Federal Government have been called upon by health workers under the umbrella of Nigerian Union of Allied Health Professionals (NUAHP) to declare a state of emergency in the healthcare system because the health sector needs urgent attention and remodeling.

This call was made recently at a protest in Lagos State where the angry workers decried the present state of health institutions in the country. They claimed that if the nation must have access to standard health care, the ugly situation in the healthcare system must be attended with urgency, with more human capacity development and funding to power the health sector.

The National President of the union, Obinna Ogbonna, said in a that the decay in both service and administration in the sector is as a result of the years of negligence by past administrations.

The health workers comprising of physiotherapists, dental technologists, health information managers, pharmacists, medical laboratory scientists, and other related professionals, moved in a group starting from the Lagos State University Hospital (LASUTH), Ikeja, down to the Governor’s Office at Alausa, Ikeja, singing the normal solidarity songs to express their grievances.

Obinna voiced out that the level of corruption in the Nigerian health care system leads to the loss of innocent precious lives. He emphasized that Nigerians’ confidence in the country’s health system is pretty low and this is because there of the lack of much needed state of the art equipment in the country’s hospitals, inadequate personnel and lack of infrastructure, which have led to the death of thousands of Nigerians.

Ogbonna said, “Patients virtually buy all that is needed for their treatment from shops outside the hospital ranging from hand gloves, sutures to drugs. Most of the pharmacies in the government hospitals have been nicknamed “out of stock centres”.

The union’s president stated that NUAHP members and health workers generally didn’t believe in a continuous strike especially considering the side effects on the patients. He, however, stressed that they would not slack back to embark on one if the government turns deaf ears to their demands.